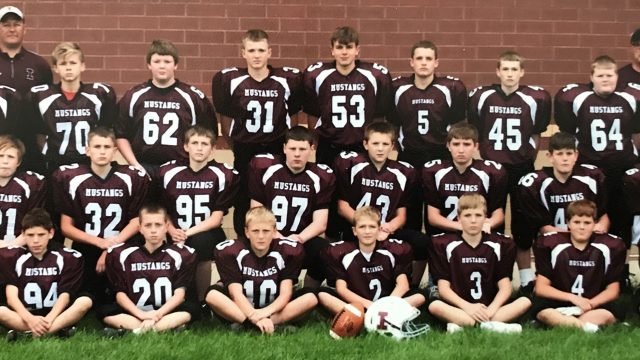 INDEE’s “A Team” went 5 & 1 this season, outscoring opponents 142 to 68.  Their only loss was to West Delaware 14 to 22 in week #4.  5 Different players scored either a TD or PAT in the “A Games” for the Mustangs.  INDEE adapted schemes to fit their personnel while also installing the High School “no huddle” style offense.  Our strength became our diversity on offense with 5 or 7 kids who were willing to become offensive lineman and take pride in their efforts in these positions.  This allowed the team to place playmaking kids in positions to be successful.  For example, in our win over South Tama we had 28 offensive plays, 14 pass, 14 run, with 8 different players who caught or carried the ball on our way to scoring 36 points.  This type of balanced attack is rarely seen at the Junior High level and was a staple for INDEE this season.  The 7th Grade Mustangs were Coached by Bob Beatty and Chad Beatty.

7th Grade “B Team” compiled a 3 and 2 overall record this season and 4 different players scored either a TD or PAT for the Mustangs “B squad”.